Considering the common interest in understanding the formation and evolution of the Iranian Plateau, the Institute of Geology and Geophysics, Chinese Academy of Science and RIES started a long-term collaboration in 2012 under a project called CIGSIP which focus on the geology and deep structure of the Iranian Plateau by means of multiple geological-geophysical transects. The collaboration is aiming at designing and performing a geological and geophysical joint survey, exchanging, processing and interpreting related data and information, participating in the education of their students.

After four years collaboration 2012, fieldwork along tow geological and geophysical transects in the Iranian plateau has been completed. The first one is a NE-SW transect the Zagros Fold and Trust Belt to the coastal area of the South Caspian Basin in the northwestern Iranian Plateau. The second one is a roughly N-S transect the Kopeh Dagh belt to the southwestern boundary of the Lut block in the northeastern Iranian Plateau.

The goal of many earthquake engineering analyses is to ensure that a structure can withstand a given level of ground shaking while maintaining a desired level of performance. But what level of ground shaking should be used to perform this analysis?  Probabilistic Seismic Hazard Analysis (PSHA) aims to quantify these uncertainties, and combine them to produce an explicit description of the distribution of future shaking that may occur at a site.

However, there is a great deal of uncertainty about the location, size, and resulting shaking intensity of future earthquakes. This comes mostly incompleteness of earthquake catalogs and long return period of larger events. The main goal of the current project is to overcome this problem by integrating seismic, geodetic and geological data which provide information about much longer time span and provides more robust results.

Water resources depend on winter precipitation, yet our knowledge of its sensitivity to climate change remains limited. Similarly, understanding the potential for future loss of winter snow pack requires a longer perspective on natural climate variability. A joint project between University of Oxford and RIES on paleoclimate study of Iran started in 2013 by collecting speleothem samples caves in NE and Central Iran. The purpose of project is to reconstruct climate change for late Holocene time. Several field trips and extensive sampling has already been conducted and results will be published soon.

Damavand, Sabalan, Sahand, Bazman and Taftan are five dormant stratovolcanoes located in the populated parts of Iran. The eruptive potential of the volcanoes remains poorly constrained largely because reliable age information for past eruptions is presently unavailable, but geologic mapping indicates that explosive and effusive eruptions these volcanoes need to be considered a threat for cities and economically important installation in their vicinity. 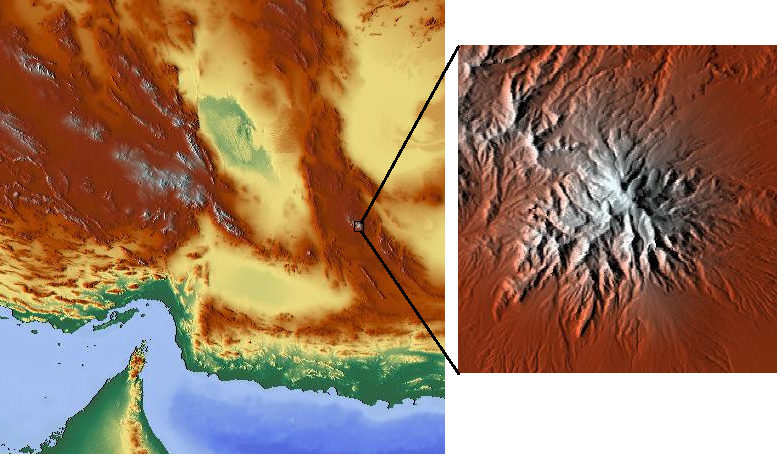